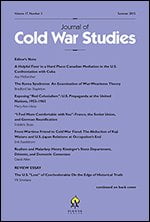 Bradford Ian Stapleton demonstrates that this American response is hardly surprising. Stapleton aims to carefully evaluate the veracity of the war-weariness hypothesis, the claim that “if wars are unsuccessful or achieve murky results, they are apt to diminish states’ propensity to engage in new conflicts, particularly with ground troops” (37). To assess the theory Stapleton carefully elucidates the underlying causal mechanisms for war-weariness hypotheses. He also considers an alternative reassertion hypothesis that argues that states will anticipate challenges in the wake of quagmires and attempt to forestall such challenges by behaving more forcefully.

Stapleton examines the mechanisms by looking at decision making in the Dwight D. Eisenhower administration in the Dien Bien Phu and Offshore Islands crises in the immediate aftermath of the Korean War. He finds that war-weariness exerted a minor influence at best in precluding larger U.S. involvement. The Korea experience did increase opposition to the introduction of ground troops to support the precarious French position in Indochina in 1954. At the same time, the Eisenhower administration seriously contemplated intervention in order to prevent falling dominos. Intervention would come if the administration could forge a united effort in which “indigenous forces would provide ground troops” leaving the United States to “provide air and naval support in addition to equipment and finances” (60). Failure to attain such support and uncertainty over the efficacy of air power alone, rather than war-weariness, led to the decision not to intervene. In addition, Stapleton shows that had China intervened, the United States planned to use decisive force. The ‘Korea syndrome’ for Eisenhower was not to avoid a fight but rather that “there should be no half measures or frittering around. The Navy and Air Force should go in with full power” (61).

A similar story emerges from the People’s Republic of China’s pressure on Nationalist island positions from September 1954 to April 1955. The fact that the crisis was a more clear-cut case of external aggression, combined with the perceived need to demonstrate resolve in the wake of Korea, which is consistent with the reassertion hypothesis, led the administration to take a hard line even if that meant fighting. “Deploying ground troops was still anathema,” notes Stapleton, “but Congress provided Eisenhower a blank check for fighting in defense of Formosa” (62). Allied pressure and the eventual Chinese desire for talks, rather than war-weariness, helped keep the situation from escalating.

The article makes a number of important contributions. To begin with, it demonstrates the utility of a dialogue between theory and careful historical examination. Theory, in Marc Trachtenberg’s words, is an “engine of analysis.”[2] For Stapleton, theory clearly drives the questions that he asks in the case studies. At the same time, the detailed historical analysis allows for a more nuanced interpretation of the effects of costly military actions. Political science studies that rely on the presence of a phenomenon and knowledge of whether an outcome occurred or not might incorrectly assert that the Korea case and subsequent non-interventions supported war-weariness claims. Stapleton convincingly shows that the use of force was very much on the table, and relies on an impressive array of evidence that includes congressional records, national security meetings, and public opinion data. In addition, the nature of war-weariness has clear implications for how we should think about U.S. behavior today. Is the United States in the midst of a broad-based retrenchment brought on in part by the experience in Iraq? Or is that experience likely to be less salient than many fear (or hope)? Finally, Stapleton provides a service by detailing the potential mechanisms that link costly military adventures to hesitancy (41-45). Terms like war-weariness, Vietnam syndrome, or Iraq syndrome are, to borrow from Ronald Steel, “simple in phrasing but vague in meaning.”[3] Stapleton’s discussion provides a foundation for additional empirical work in this area.

There are a number of puzzles and questions that emerge from Stapleton’s article. First, the evidence that Stapleton provides reinforces as much as it challenges the war-weariness argument. Stapleton notes on multiple occasions that the core of the war-weariness hypothesis is a subsequent reluctance to use ground forces (e.g., 36-37). Yet when he discusses what types of evidence would support war-weariness claims he makes no mention of preferences for different types of force (45). This allows him to argue that he refines our understanding of war-weariness by demonstrating that inconclusive conflicts are more likely to influence how states intervene subsequently rather than whether they are willing to do so (40-41). Yet on Stapleton’s own terms, the how – an aversion to ground forces – is already built into the claim. Stapleton’s analysis can therefore be read as being consistent with war-weariness, at least as much as with reassertion hypotheses, but Stapleton does not frame his argument in this way. More generally, this framing prevents him from exploring the possibility that war-weariness and reassertion are complementary rather than competitive hypotheses. Stapleton hints at such a theoretical refinement in the conclusion but does not develop the idea (80).

Second, Stapleton’s discussion raises a broader question regarding the deployment of large numbers of ground forces. For Stapleton, the experience in Korea contributed to a hesitancy to introduce ground troops. He alludes to the Nixon Doctrine in the wake of Vietnam and President Barack Obama’s reliance, in the wake of Iraq, on air power in the fight against ISIS as evidence of a similar tendency. Yet one does not have to look hard for similar preferences following successful major military operations. During World War II – hardly an inconclusive conflict – President Franklin Roosevelt envisioned a postwar role for the United States as a balancer of last resort, providing air and sea power rather than ground troops. President Harry Truman initially sought to rely on the American atomic monopoly and mobilization potential to defend Europe rather than directly commit ground forces. Following the first Gulf War of 1990-91 – a war in which President George H.W. Bush asserted that “We’ve kicked the Vietnam Syndrome once and for all” – President Bill Clinton demonstrated a clear preference for air power over the introduction of ground forces.[4] One must ask how much American behavior following inconclusive military operations is therefore the result of fatigue rather than reflective of a more general American desire to substitute capital for manpower in military operations. If it is indeed broader American preferences then war-weariness may be even less causally significant in the American context than Stapleton allows. Answering such a question is beyond the scope of Stapleton’s article, but worth consideration when examining the war-weariness hypothesis in the future.

In the end, Stapleton does a service by carefully investigating war-weariness claims. The analysis is particularly timely in the wake of the Iraq War and increasing U.S. operations in Iraq and Syria. Future research can build from this study to further refine our understanding of the extent to which these conclusions are generalizable.

Paul C. Avey is an Assistant Professor of Political Science at Virginia Tech. He earned his Ph.D. in political science from the University of Notre Dame. He is the author or coauthor of articles in International Security, International Studies Quarterly, Foreign Policy, and most recently of “Who’s Afraid of the Bomb? The Role of Nuclear Non-Use Norms in Confrontations between Nuclear and Non-Nuclear Opponents,” Security Studies 24:4 (2015): 563-96. Avey is currently working on a book project that explores why states without nuclear weapons challenge and resist nuclear armed opponents.

[2] Marc Trachtenberg, The Craft of International History: A Guide to Method, 32.