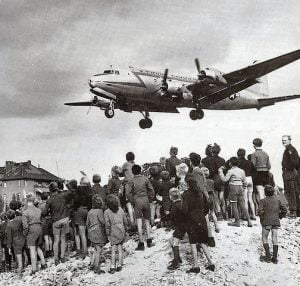 How do states prevail in crises? In “Advancing Without Attacking: The Strategic Game Around the Use of Force,” Dan Altman presents a new way of thinking about strategic interactions in crises. Unlike the established view of crisis strategy, in which states signal resolve (often through brinksmanship) to establish the credibility of their threats, Altman argues instead that states frequently choose to bypass this type of coercive behavior altogether in favor of simply outmaneuvering their opponent through fait accompli. He tests his argument against the traditional coercive explanation in a case study of the Berlin Blockade crisis of 1948-1949.

How do states prevail in crises? In “Advancing Without Attacking: The Strategic Game Around the Use of Force,” Dan Altman presents a new way of thinking about strategic interactions in crises. Unlike the established view of crisis strategy, in which states signal resolve (often through brinksmanship) to establish the credibility of their threats, Altman argues instead that states frequently choose to bypass this type of coercive behavior altogether in favor of simply outmaneuvering their opponent through fait accompli. He tests his argument against the traditional coercive explanation in a case study of the Berlin Blockade crisis of 1948-1949.

Central to Altman’s framework is the notion of the use-of-force red line as a constraint on escalatory behavior. Because war is costly, argues Altman, states find value in creating clear limits in order to avoid escalation in crises. One such clear limit or red line is the use of force, the crossing of which may not always result in war but which always increases the risk of one. Like Julius Caesar’s crossing of the Rubicon River, the use of overt force by a state in a crisis marks a fundamental break from previous behavior. Because of the significance of this red line, states adopt ambiguous tactics that allow them to make gains where possible without outright crossing the line. Much of the behavior we witness in crises can be explained by reference to this strategic maneuvering, Altman argues. During the Berlin Blockade crisis of 1948-1949, for example, each side sought to push the other as far as possible without resorting to outright force. The Americans chose an airlift rather than an armed convoy to circumvent the Soviet blockade for fear that a convoy could lead to war. To American eyes, the airlift offered an advantage over an armed convey because “trucks could be blocked, but planes could only be shot down” (21). In the air, the Soviets would have to fire first; on the ground, the Americans. Unwilling to cross this red line, the Soviets responded by firing high-powered searchlights (instead of artillery) at the American transport aircraft. By adopting this ambiguous tactic, the Soviets, like the Americans, demonstrated their preference for applying pressure and taking gains where possible, short of deliberately using force.

So far, Altman’s story has much in common with the established view of strategic interactions in crises. American and Soviet decision-making in the Berlin Blockade crisis closely resembles what Thomas Schelling referred to as the doctrine of ‘last clear chance,’ whereby states maneuver themselves into a position where the initiative is up to the enemy and it is he who must make the awful decision to escalate to direct confrontation.[1] By choosing planes over trucks, the Americans left the Soviets with the last clear chance to avoid escalation since it was the Soviets who would have to fire to stop the airlift. However, Altman distinguishes his framework from that of Schelling’s by casting doubt on the existence of “true last moves,” contending instead that such moves represent “not an innate feature of the strategic game” but rather a “construct predicated on the salience of crossing certain red lines” (11). But it is not clear that Schelling, as Altman implies, viewed this step as innate to every strategic interaction between states. Schelling portrays the doctrine of the last clear chance as conscious maneuvering by a state into a position where the objective is to get others to cross the threshold first. But this maneuvering was likeliest to occur, he argued, “when both parties abhor collision”–the same scope condition that seems to underpin many of the crises (e.g. Cod Wars between England and Iceland in the mid-1900s and the Spratly and Senkaku Island disputes in recent years between China and its neighbors) discussed by Altman (8, 30).[2] As Altman himself notes, the fear of inadvertent escalation also served as a powerful constraint in the Berlin Blockade crisis. Clearly, Berlin mattered to both sides. But neither side thought it mattered enough to risk a direct confrontation so soon after the Second World War. Two implications follow. First, issue salience may be an overlooked scope condition of Altman’s framework: states will attempt to advance without attacking when the issue at stake is important, but not important enough to risk major war. Second, if advancing without attacking is another tactic in a state’s toolbox, what conditions (other than issue salience) determine its use? While Altman hints at possible answers like geographical and technological factors in the article, the question of what drives states to try their hand at advancing without attacking instead of other available strategies is never directly addressed. To be fair, no article can do everything and this is only the first installment in what promises to be a fruitful research agenda. The reader looks forward to seeing how Altman will engage with these issues in future pieces but for now can only speculate as to the possible determinants of states’ strategic calculus.

At times, Altman’s discussion of his main empirical case seems incomplete. According to him, the established framework cannot account for the crisis outcome he argues since the U.S. neither utilized coercive threats or ultimatums nor seriously attempted to convince Soviet leaders of its willingness to use force. This absence of clearly communicated threats is an important distinction between the traditional coercion framework and his own. One possibility not considered by Altman is that the airlift was intended to serve as a powerful signal, in and of itself. Rather than explicitly communicate threats, states may sometimes choose instead to do so implicitly through their actions.[3] Or they may fail to properly communicate them. While harder to interpret, the adversary may sometimes still draw the right conclusion. In this case, it is possible that the Russians interpreted the U.S. military’s ability to operate and maintain an airlift over Berlin for over a year as a powerful signal of American resolve. Verbal statements to this effect were unnecessary when faced with the reality of seemingly never-ending daily sorties. Nor did it require a leap of imagination on Moscow’s part to speculate as to the likely American reaction were the Soviets to shoot down an American plane. Additionally, while interesting, Altman’s revisionist interpretation of the B-29 debate is not entirely convincing. His claim that the deployment of U.S. heavy bombers to Britain “had no observable impact on Soviet policy” during the crisis is as yet untestable given the paucity of available Soviet documents from the period (19, 23, 28).

His application of the advancing-without-attacking framework to more recent crises like Russia’s occupation of Crimea in 2014 also seems incomplete. In occupying the peninsula, Altman argues, the Russians succeeded in making gains by maneuvering around the use-of-force red lines instead of conquering it by force. Given that Altman both opens and closes the article by referencing this case it seems odd that there is no discussion of other possible red lines, such as territorial integrity, and the role they might have played in this crisis. Why did Russia go to such lengths to avoid the use-of-force red line while not hesitating to violate the sovereignty red line? Moreover, if the former was as powerful a constraint as Altman suggests, what accounts for the observed variation in Russia’s tactics in the Donbass region, where fighting did occur? Finally, and relatedly, what role does the balance of capabilities play in advancing without attacking? Had Ukraine been militarily capable of resisting the Russian occupation of the Crimean Peninsula Kiev might have ordered its troops to do so instead of ordering them withdrawn.[4] Moscow’s calculation that Kiev could not fight in Crimea undoubtedly played an important role in its choice of strategy. Had Moscow thought Kiev capable of resisting it likely would have chosen a different strategy. Strategic decisions should always be guided by considerations of the likely response of one’s opponent. Kiev was the weaker party and it lacked any security guarantees which left it with no choice but to withdraw, a fact the Russians knew and ably exploited. Though not explored by Altman, such considerations clearly mattered.

Yet Altman deserves high praise for producing a theoretically rich addition to the long-established orthodoxy on crisis behavior. His revisionist discussion of the Berlin Blockade crisis is also a welcome contribution to a growing body of work that sees to unpack the various stages and mechanisms involved in strategic interactions. Rather than an entirely new theory, what Altman offers us instead is a refinement of Schelling’s enduring framework. Both Schelling’s coercion and Altman’s advancing-without-attacking strategies are dependent on the target’s response. Just as coercion requires affirmative action on the part of the target, so too does advancing without attacking.[5] The key difference is that whereas Schelling may have envisioned this escalatory action in terms of the employment of force only, Altman recognizes the possibility that states may respond short of this by acting in the ‘gray zone’ as the Soviets did by firing searchlights at American planes during the Berlin crisis or the Russians did through their use of ‘little green men’ in Crimea in 2014. In other words, what Altman provides us with is another step on the ladder, somewhere between coercion and brute force. This is a significant and welcome contribution to our understanding of escalation dominance.[6]

Sara Bjerg Moller is an Assistant Professor in the School of Diplomacy and International Relations at Seton Hall University and a Non-Resident Fellow at the Modern War Institute at West Point. For the 2017-2018 academic year, she is also the Stanton Junior Faculty Fellow in the Security Studies Program at MIT. Her work explores the causes, conduct, and consequences of multilateral military interventions. The views expressed herein are those of the author and not necessarily those of West Point, the Department of the Army, the Department of Defense, or any agency of the U.S. government.

[3] Although coercion works best when it is explicitly communicated, coercive threats can also be implicit. On the role of implicit nuclear threats in crises, see Todd S. Sechser and Matthew Fuhrmann, Nuclear Weapons and Coercive Diplomacy (Cambridge: Cambridge University Press, 2017), 22, 94-95; Daniel Byman and Matthew Waxman, The Dynamics of Coercion: American Foreign Policy and the Limits of Military Might (New York: Cambridge University Press, 2002), 105.

[5] Brute force, by contrast, requires no such collaboration. Schelling, 8, 80.

Berlin Blockade crisis strategy last clear chance use of force
We use cookies to improve your experience. By your continued use of this site you accept such use.
Accept Read More
Privacy & Cookies Policy
Necessary Always Enabled