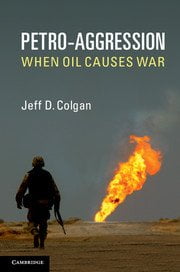 Colgan argues that oil income generates cross-cutting incentives for petrostates when it comes to using force. Following liberal interdependence logic, such countries should avoid wars out of concern that military conflict could disrupt oil exports, and therefore jeopardize government revenue. Yet on the other hand, Colgan contends, oil income decreases the domestic political risks of starting wars by furnishing leaders with copious economic resources that can be used to evade political accountability in the event of military failure (27-32). Thus, Colgan’s theory extends “resource curse” arguments into the international realm.[3]

Whether oil income ultimately will increase or decrease conflict propensity hinges on the nature of the regime. Colgan argues that petrostates ruled by revolutionary leaders are far more inclined to settle disputes with military force than ordinary petrostates, for two main reasons. First, revolutions tend to produce risk-tolerant leaders with revisionist preferences. Revolutionary leaders, therefore, have expansionist goals and are willing to gamble on wars to achieve them. Second, the political upheaval that installs revolutionary leaders simultaneously sweeps aside the domestic political institutions that might otherwise constrain the executive. Combining revolutionary politics with the insulating effects of oil income for political leaders creates incentives for aggression that outweigh concerns about lost oil revenue (20-27).

It is a shame that Petro-Aggression brands itself primarily as an oil book, omitting ‘revolution’ from the title, because this may cause it to be overlooked by scholars of political development and revolutionary change. In fact, it contributes as much to understandings of revolution and war as it does to oil and international politics.[4] In addition to insight on revolutionary leaders’ preferences, Colgan offers a clear, consistent operationalization of the concept of “revolution” and assembles a complete dataset of revolutionary regimes from 1946-2001 (61-66). Moreover, the book suggests that revolution is a particularly strong predictor for war initiation; the quantitative analysis finds that revolutionary regimes are more likely to instigate conflict than non-revolutionary governments, period – whether they are petrostates or not (70-75).

Like many international conflict researchers, Colgan relies on the widely-used Militarized Interstate Disputes (MIDs) dataset for his quantitative analysis. Unfortunately, recent work by Alexander B. Downes and Todd S. Sechser calls the validity of the dataset into serious question. Most pertinent to Petro-Aggression, Downes and Sechser find that a large number of MIDs do not qualify as “interstate” incidents because the primary disputants were not leaders but “rogue soldiers” or other low-level individuals acting under their own impulses rather than directions from the regime. Some fraction of MIDs did not even involve the threat or use of force. As a robustness check, Colgan also tests the theory using the International Crisis Behavior (ICB) dataset, but Downes and Sechser argue it is plagued with similar problems (60, 87).[5]

Petro-Aggression is at its best when it sticks to its core contribution: unpacking the relationship between oil and war initiation. It becomes less convincing when it conceptually stretches the dependent variable to include “aggression,” which is defined loosely and seems to include nearly any type of bad behavior.[6] For example, in the Libya case alone, all of the following actions qualify as “aggression” by Muammar Qaddafi: lobbying countries to break diplomatic ties with Israel; treaty-based efforts for national unification under pan-Arabism; arms racing; funding foreign insurgencies and terrorism; pursuing a nuclear weapons program; initiating or escalating militarized disputes; and initiating or escalating interstate war (136-145).

Defining the dependent variable imprecisely creates three issues. First, it lumps together vastly different phenomena, for which many alternative explanations already exist. Colgan neither engages these competing literatures at length nor tests his theory against them. (Doing so would be impossible in a single book.) Second, such behaviors are not always aggressive. For example, most scholars argue that states acquire nuclear weapons because of their deterrent/defensive value.[7] Similarly, even status-quo security seekers engage in arms races under certain conditions.[8] Third, and most importantly, the definition is not applied consistently across the case studies, and as a result, it unnecessarily dilutes the supporting evidence. For example, to his credit, Colgan includes a null case in the qualitative tests: Saudi Arabia, a non-revolutionary petrostate, which according to his theory should eschew aggression (Chapter 9). The country mostly did avoid war initiation from 1946-2010; however, it engaged in sub-war behaviors that Colgan would classify as “aggression” in other cases – for example, financing insurgencies in Latin American, Africa, and Central Asia, including the Taliban’s takeover of Afghanistan during the civil war of the 1990s. Had Colgan limited the scope of the dependent variable to war initiation, the Saudi case would better support his theory.

Nevertheless, Petro-Aggression remains an impressive book. Colgan provides the first systematic framework linking oil wealth to interstate war. So doing, he offers a theoretical foundation for future research on a topic likely to grow in importance over the next several years – both within the field of international relations and out in the ‘real world.’

Rosemary A. Kelanic is Associate Director of the Institute for Security and Conflict Studies at the Elliott School of International Affairs, George Washington University.  Her research focuses on international security, energy politics, political coercion, and U.S. foreign policy.  Her book manuscript, Black Gold and Blackmail: The Politics of International Oil Coercion, argues that great powers fear the ‘oil weapon’ not because of prosperity concerns but because supply disruptions could undermine their military capabilities.  Dr. Kelanic earned her Ph.D. in Political Science from the University of Chicago.  In January 2014, she will join the faculty of Williams College as an Assistant Professor of Political Science.

[6] For the classic analysis of the problem of conceptual stretching see Giovanni Sartori, “Concept Misformation in Comparative Politics,” American Political Science Review 64, no. 4 (1970).

[7] States may also seek the bomb for internal bureaucratic reasons or to boost their prestige – and neither reason is inherently aggressive. Scott D. Sagan, “Why Do States Build Nuclear Weapons? Three Models in Search of a Bomb,” International Security 21, no. 3 (1996/1997).