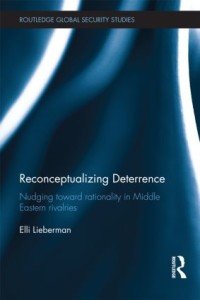 As noted by Mark Trachtenberg in History and Strategy,[2] the renaissance of research and scholarship that had developed in the 1950s and 1960s quickly burned out as the nation settled on the concept of Mutually Assured Destruction.   Importantly, however, the era spawned an accompanying body of literature on deterrence in the academy – even if the broader strategic questions for policy had been largely settled.   Patrick Morgan, Alexander George, Richard Smoke, Robert Jervis and others delved into the phenomenon, authoring what remain the definitive works on strategic nuclear deterrence. [3] An accompanying literature on bargaining, punctuated by Thomas Schelling in Arms and Influence and The Strategy of Conflict, complemented the theoretical work of the deterrence scholars. [4]

In Reconceptualizing Deterrence: Nudging Towards Rationality in Middle Eastern Rivalries (New York: Routledge, 2013), Elli Lieberman argues that it is time for scholars to move away from the intellectual dead-end of the nuclear deterrence literature toward the more fruitful task of applying the theory to conventional conflicts. In so doing, he joins a host of scholars (Janice Gross Stein, T.V. Paul, John Mearsheimer and others) who have examined the role of conventional deterrence in interstate conflict.[5]

Lieberman takes on the tangled web of politics and war in the Middle East in order to apply his variation on conventional deterrence theory, focusing on the wars between Israel and Egypt after 1948 that led to the Six-Day War and Israel’s and Hizbollah’s month-long war in July-August of 2006 in southern Lebanon. He constructs these cases as being longitudinal in nature in which the interactions between the adversaries are examined over extended periods. This is a good idea, in that Lieberman lays out these cases as resting on an historical continuum, as opposed to the short cases of deterrence successes or failures that populate the literature. He argues that different variables (balance of power, perceptions of actor capabilities, institutional and bureaucratic politics, etc.) affect the deterrent relationships and come into play at different points in the interactions that lead to war. One of his conclusions is that authoritarian regimes are less able, for example, to objectively analyze an opponent’s capability while overestimating their own (14).

Lieberman’s literature review does not necessarily contribute to this argument. It is poorly organized, as the reader becomes immersed in a haphazard discussions of the deterrence literature – a literature that is in itself reveals a bit of a conceptual morass. The book does not sensibly organize the fractured state of the field between conventional and nuclear deterrence. A task of any author in a conceptually complicated work like this is to boil down the issues so that reading the book does not become like hard labor. In this section, intellectual ground is covered and re-covered, which detracts from Lieberman’s otherwise interesting case study analysis.

As in any book like this, the author must tackle the problem of presenting case studies that elucidate the theoretical issues. Too many cases can result in a superficial treatment, while the inclusion of too few cases calls into question the generalizability of the findings.   A further problem in the field of security studies is the construction of cases in which political scientists overwhelmingly prefer deductive case study analysis. This is not surprising, since the discipline above all else values theoretical implications. By contrast, historians prefer empirical richness above else due to the requirements of their discipline and in general have little interest in predictive theoretical implications.   The cases in this book, given their geographic limitations are by necessity bounded by the particular context of Israel’s political and strategic circumstances, which limits any generalizable conclusions from the case findings.

Lieberman’s cases are reasonably constructed, and he relies primarily on the work of others in describing Egyptian and Israeli interactions in their various wars. His presentation of Egyptian President Gamal Abdel Nasser’s tumbling into the series of fateful decisions leading to the Six-Day war is particularly interesting. Lieberman attaches special significance to internal politics within Nasser’s leadership circle as a factor that led to the breakdown of Israeli-Egyptian deterrence, particularly in the decision to close the Strait of Tiran that proved critical in Israel’s decision to launch the pre-emptive strikes that started the Six-Day War.

The book examines Israel’s interaction with Hezbollah through the same prism. Lieberman exhaustively examines the adversary interactions, examining the cases from the perspective of the balance of interests, perceptions of the capability balance, reputations for action, as well as the learning of the different actors over time. As with the Egyptian case, Lieberman not surprisingly finds that deterrence breaks down due to a variety of different factors: miscalculation, domestic politics, flawed assessments foes’ capabilities, etc.

Therein lies the problem in the field for those attempting to more exhaustively examine the phenomenon of conventional deterrence. Deterrence fails for a variety of different reasons that have everything to do with the strategic and political context, military capabilities, the political salience of the issues in dispute between the protagonists, stupid leaders making bad decisions, and a host of other variables. We need to know which of these variables is the most important, and how the variables can be conclusively demonstrated to have had a decisive impact. Only an analysis of empirical material that provides the theory with some sort of predictive value will do so.

If there is common strand in this volume’s findings, it is the unsurprising finding that leaders miscalculate and make flawed decisions since they rely on imperfect information. Hezbollah leader Hassan Nasrallah tumbled into the 2006 war in Lebanon through miscalculation, just as Nasser made a series of ill-informed choices as he tumbled into a catastrophic war that signalled the end of Arab nationalism as a regional phenomenon.

The persistence of wars around the world between and within developing states suggests that there is more empirical fodder out there for scholars seeking to study conventional deterrence. This book is a worthwhile contribution to field, particularly for those who are interested in Israel’s strategic circumstances.

James A. Russell serves as Associate Professor in the Department of National Security Affairs at NPS, where he is teaching courses on Middle East security affairs, terrorism, and national security strategy. From 1988-2001, he held a variety of positions in the Office of the Assistant Secretary Defense for International Security Affairs, Near East South Asia, Department of Defense. During this period he traveled extensively in the Persian Gulf and Middle East working on U.S. security policy. He holds a Master’s in Public and International Affairs from the University of Pittsburgh and a Ph.D. in War Studies from the University of London. His latest book is Innovation, Transformation and War: U.S. Counterinsurgency Operations in Anbar and Ninewa Provinces, Iraq, 2005-2007 (Palo Alto: Stanford University Press, 2011).

© Copyright 2014-2015 The Authors.
This work is licensed under a Creative Commons Attribution-NonCommercial-NoDerivs 3.0 United States License.