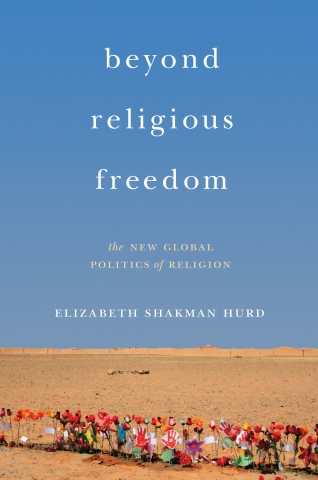 The promotion of religious freedom abroad is the subject of Elizabeth Shakman Hurd’s Beyond Religious Freedom: The New Global Politics of Religion. Unlike Knox Thames and the other attendees at the Protecting Religious Communities conference, Hurd cautions against embracing religious freedom as an unmitigated good. Hurd calls into question the “intense policy interest in religion that has taken hold in North American and European international public policy circles” (2). Privileging the category of religion in developing foreign policy, Hurd suggests, has a dark side. She argues that policies based on the principle of religious freedom establish politics defined by religious difference, privilege forms of religion favored by those in power, and marginalize alternative modes of “belief, being, and belonging” (xii).

Beyond Religious Freedom is a short monograph comprised of five main chapters. Hurd presents her argument and theoretical framework in chapter one. Chapters two through five provide a series of case studies that situate international religious freedom advocacy and politics within specific communities in which they are deployed. Beyond Religious Freedom incorporates the theoretical insights of many other scholars, including Talal Asad, Courtney Bender, Winnifred Fallers Sullivan, Saba Mahmood, and Robert Orsi. Given Hurd’s own background in political science, her willingness to incorporate scholarship from anthropology and religious studies is commendable.

Beyond Religious Freedom analyzes and critiques the use of religion in international advocacy and policy. Hurd argues that religious experts and government officials utilize a category of religion that is much too narrow. Religion, Hurd contends, “is too unstable a category to be treated as an isolable entity” (6). Rather than treating religion an isolable entity, Hurd engages religion through three lenses: expert religion, governed religion, and lived religion. Expert religion represents religion as it is “construed by those who generate ‘policy relevant’ knowledge.” Religious experts have risen to prominence during the last two decades as the demand for religious knowledge has led to the proliferation of academic journals, conferences, university centers, and think tanks. Governed religion is religion as it is “construed by those in positions of political and religious power.” These sources of power include states as well as other authorities such as supranational courts, organizations like the European Union, international Non-Governmental Organizations (NGOs), as well as churches and other religious organizations. Lived religion, finally, denotes religion as “practiced by everyday individuals and groups” (8).

After explaining these three lenses in chapter one, Hurd focuses on expert religion in chapter two, which explores the operationalizing of religion in more detail and highlights the role of religious experts in this process. The 11 September 2001 terrorist attacks resulted in an explosive demand for religious knowledge, and an array of academic and policy experts rushed to meet it. A new slew of policy experts argued that religion needed to be ‘brought back in’ to policy discussions after it had been sidelined by secularism. Experts constructed the “two faces of faith” narrative that posited bad religion on one side and good religion on the other (22-31). Bad religion was sectarian, intolerant, and prone to violence, while good religion was peaceful, tolerant and moderate. Good religion had the power to emancipate people from social ills such as gender oppression and mistreatment of minorities while at the same fostering democratization. The two faces of faith narrative also posited an important role’ for governments. Public authorities needed to recognize and empower good religion to combat bad religion and the social ills associated with it.

Hurd turns her attention from expert religion to governed religion in chapters three, four, and five. These explore the relationship between governed and lived religion, and the often-unforeseen consequences when governments operationalize the category of religion for political ends. According to Hurd, the governments of the United States and, to a lesser extent, Europe have adopted the view that it is their role to foster “tolerant, democracy-friendly, legally supervised religion—at home and abroad” (17). Chapter three examines international efforts to promote religion as a human right. Hurd argues that enshrining religious freedom as a human right has unintended consequences. First, it privileges religious groups that look like those in the U.S. and Europe, groups that emphasize the centrality of belief and have clear designations and leadership structures. Groups and individuals that do not fit this model, such as female practitioners of traditional religion in the Central African Republic, can “fail to appear on the persecuted religious minority radar screen” of religious freedom advocacy groups” (51). Second, Hurd argues that incorporating religious freedom in international policy raises religion to a key marker of social difference and can reinforce the religious divides and social conflict it is meant to alleviate. Finally, emphasis on religious freedom can obscure other factors that can lead to social tension, discrimination, and violence. These consequences characterized religious freedom advocacy on behalf of the Rohingya in Myanmar. The imposition of a religious rights framework exacerbated religious differences and ignored the economic and political causes behind Rohingya discrimination (41-48).

Chapters four and five deal, respectively, with the politics of U.S. religious engagement and international endeavors to govern groups defined as religious minorities. Since the 1950s, the U.S. has positioned itself as the global guardian of free religion, and contemporary programs continue in this vein of American exceptionalism. Much like the application of the category of religion in religious rights advocacy and policy, international religious engagement involves significant problems. The government must define “who is a religious actor and who is not, who counts as a religious authority and who does not, and which religions are considered legitimate partners for engagement and which are not” (67). The winners in the competition for financial support are often those groups most able to advance U.S. political and economic interests, which are the religions of the majority and the politically powerful. Dissenting groups and nontraditional religions rarely qualify for engagement. Chapter five examines the politics of governing religious minorities and focuses on the Alevis in Turkey. Alevism, Hurd suggests, is an “evolving and contesting set of lived tradition with ambiguous and unsettled relations to various orthodoxies” (107). The situation of the Alevis illustrates the incongruities between governed religion and lived religion. Hurd highlights two legal definitions of Alevism, one from Turkey’s Presidency of Religious Affairs and the other from the European Court of Human Rights. Turkey defines Alevism as a heterodox interpretation of Sunni Islam, which denies the Alevis both the privileges granted to Sunni institutions and those granted to religious minorities like Christians and Jews. The European Court, meanwhile, defines the Alevis as non-Sunni Muslims that are guaranteed minority rights. Both definitions, Hurd argues, carry negative consequences. First, they both fix Alevism as a religion, despite there being disagreement among the Alevis themselves on this point. Second, by designating Alevism as a religion, government authorities also make religion a key marker of social difference and risk increasing social tension rather than alleviating it (96-106).

Beyond Religious Freedom offers a bold argument that inevitably will be controversial. Hurd’s assertion that governments—including the U.S. government—have privileged religion as a basis for designing foreign policy contradicts the arguments of many religious experts. Thomas F. Farr, the director of the State Department’s Office of International Religious Freedom from 1999-2003, argues that religious freedom policy has remained “functionally and bureaucratically quarantined” within the State Department.[2] Likewise, Katrina Lantos Swett former Chair of the United States Commission on International Religious Freedom, has said that religious freedom “was not a priority in a meaningful way” for either the George W. Bush or Barack Obama presidential administrations.[3] Despite the rhetoric of the Trump administration, there is little indication that religious freedom will cease to be a marginal issue. Secretary of State Rex Tillerson recently cautioned against making others adopt values such as freedom or human dignity if they create “obstacles to our ability to advance our national security interests, [or] our economic interest.”[4] The marginal status of religious freedom in U.S. international relations and policy challenges Hurd’s assertion that it possesses a privileged position. The correlation between the discourse of religious freedom advocates and U.S. foreign policy is not as strong as Hurd suggests. As scholars like Anna Su and Robert P. George have noted, even when government officials establish religious freedom in law and policy, these policies and laws are not necessarily enforced.[5] Ultimately, the singling out of religion “for developing policy, protecting human rights, and responding to global crises,” and the problems that go along with this, are not as prevalent as Hurd suggests (124).

These reservations aside, Beyond Religious Freedom is an impressive work that presents an important interpretation of religion in U.S. foreign relations. Hurd rightly argues that religion is not something that can be easily isolated in policy and law. Further, constituting religion in law can exacerbate—rather than help—problems of religious discrimination and persecution. Finally, religion enshrined in law and policy can never capture the expansive nature of lived religious practice. Some religious individuals and groups are inevitably privileged while others fail to qualify for religious protections. Beyond Religious Freedom should be read by policymakers as well as religious and foreign policy experts.

Luke Schleif is a Ph.D. Candidate at the University of Missouri-Columbia. His research examines religion and U.S. foreign relations with a focus on the role American missionaries in decolonization of central Africa.

[3] Emma Green, “Protecting Religious Freedom Is a Foreign-Policy Priority of the Trump Administration,” The Atlantic, 12 May 2017. https://www.theatlantic.com/international/archive/2017/05/religious-freedom-trump-administration/526320.