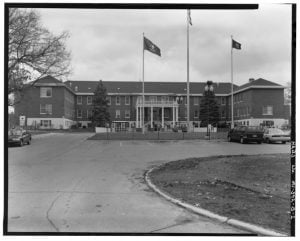 Jessica L. Adler, who teaches history and health policy at Florida International University, offers us a valuable, well-organized, and carefully researched history of the origin and early development of what is today the mammoth and often troubled Department of Veterans Affairs (VA) health care system. Mammoth it is; the VA treats over 9 million veterans each year in 170 medical centers and over 1000 outpatient clinics staffed by more than 300,000 personnel. It is the largest integrated health system in the nation and costs over $60 billion to operate annually. Although rarely described this way, the VA system is America’s main example of socialized medicine.

Jessica L. Adler, who teaches history and health policy at Florida International University, offers us a valuable, well-organized, and carefully researched history of the origin and early development of what is today the mammoth and often troubled Department of Veterans Affairs (VA) health care system. Mammoth it is; the VA treats over 9 million veterans each year in 170 medical centers and over 1000 outpatient clinics staffed by more than 300,000 personnel. It is the largest integrated health system in the nation and costs over $60 billion to operate annually. Although rarely described this way, the VA system is America’s main example of socialized medicine.

Adler focuses on events during and after the First World War when the basic framework for the current system was set in place. Previously, the attention of veterans was on pensions, disability payments and care for the elderly in a patchwork of soldier homes. But the war marks both the improvement in medical science to the point where medical care saved lives and a spike in the need for medical services that led with many twists and turns to the creation of an independent hospital system dedicated to the care of veterans.  All of this was the product not of planning, but rather the haphazard patchwork of everyday politics. Veterans are a protected class of governmental claimants because of their numbers and service, and Adler describes how they obtained their special hospital system.

The modest legislative vehicle for starting the process was the War Risk Insurance Act passed in 1914 to protect American vessels and cargos from “… loss or damage by the risks of war” (13). With American entry into the war in 1917 the law was expanded to include the security of those who served and their families by providing support for dependents, compensation for death and disability, and offering a non-compulsory life insurance scheme, but also a vaguely worded promise for government provided medical services that the director of the Bureau of War Risk Insurance might determine as necessary and reasonable to those who served. It was a step into the unknown, taken apparently to avoid the legacy of dependency and budgetary burden that was thought to have been created by Civil War pensions by offering care and rehabilitation to war injured. Treated and restored, the wounded veteran would not a societal burden. How this was to be accomplished was left to the agencies involved to decide.

The Army tried to cope with the over two hundred thirty thousand injured overseas, but soon found its facilities inadequate to the task. Moreover, Congress added to the eligible by mandating that all called for service, whether or not they were fully trained when the war ended or ever deployed overseas, were the government’s responsibility, thus piling on millions more to the potential care list in what was a very short war for Americans. The Public Health Service, which had hospital facilities, was brought in to help, as were civilian hospitals and the Federal Bureau of Vocational Education, which had rehabilitation programs for the recovering. The care outside of military hospitals was financed by the Bureau of War Risk Insurance.

With the war over, the Army’s medical cadre sought to return to their peacetime pace and duties, but there were important questions to answer before the Army could disengage: what were the government’s obligations toward veterans and how were they to be fulfilled? There was no system in place to determine the medical needs of demobilized soldiers, the causes of their conditions, where appropriate care might be found, and who was to be in charge and who was to pay for it all. There was, though, a developing lobby for veterans in the form of the American Legion, Disabled American Veterans (DAV), and other veterans’ groups, and there were activist bureaucrats who had expansionary views of the government’s role in caring of veterans.

According to Adler, the catalyst for creating the organizational structure required to define and provide adequate care for veterans was the fear among political leaders that veterans would grow increasingly receptive to radical socialist appeals unless their medical needs were met. Consolidation of the elements of the several agencies dealing with veterans was the agenda set by the bureaucrats and veterans advocates. She notes that in keeping with the times, the effort was accompanied by claims that a new structure would promote efficiency and avoid waste. The product was the Veterans Bureau, which was to be an independent agency reporting directly to the President and thus free in the view of proponents of the fiscal bias of the Treasury Department, where veterans’ pensions were traditionally housed, and the broader welfare interests of the Interior Department, where some social programs were located.

Laughably in retrospect, some in Congress thought the Veterans Bureau when it was created in 1921 would have a fading mission, disappearing or at least shrinking greatly within a few years. But there was not any chance of that given the benefit expansions included in the bill creating the Bureau. Not only were veterans who were injured or ill during their time of service eligible for care, but also those with preexisting conditions who could claim that such conditions were aggravated by their service. Moreover, it was to be presumed that tuberculosis and neuropsychiatric disorders discovered up to two years after service were service-related. One senator, perceptively Adler says, argued that these provisions would open the way “for a subsequent extension of access to all veterans” (171) which apparently it did, as VA hospitals do provide care for all veterans, though prioritizing those with service connected conditions.

Under the aggressive leadership of Charles R. Forbes, the Bureau was soon acquiring facilities from the Public Health Service, building new hospitals, expanding benefits and creating the impression that care in government hospitals for veterans had to be in facilities that were exclusively for them. The expansion was not fast enough for some advocates and Forbes fell under suspicion for corruption. His preference for the high life and willingness to take a cut of sales of surplus equipment led to a conviction and two years in the Leavenworth Federal Penitentiary. Forbes’s replacement, Frank T. Hines, restored faith in the Bureau by working closely with the Legion and other veterans’ groups and friendly congressmen and senators, forging what political scientists call an iron triangle of bureaucrat-, congressional-, and interest- group power to enhance and protect veterans benefits from outsiders, even those claiming to serve the wider public interest.

Fending off outsiders was only half of the administrative problem. Veterans themselves worried less how the package of benefits won legislatively grow or are protected from poachers than they did about how they fare as individuals inside the system as they seek to use the benefits. There was the screen of doctors, administrators, and geography to pass through to gain a disability percentage assessment and actual access to care. As Adler finds, blacks and female veterans encountered a very unequal system that usually pushed them aside for whites and men. But it was partly a supply and demand problem. As the supply of facilities increased, the barriers to care fell although not evenly. The discretion built into the benefit structure gave room for expansion of services.

In 1930 the Veterans Bureau merged with the Bureau of Pensions and the National Home for Disabled Volunteer Soldiers to form the Veterans Administration (VA). As economic conditions worsened in the country, opposition to the special treatment of veterans and their particular brand of socialized medicine grew. First to complain were the physicians, who did not welcome the state subsidized competition for patients especially as the VA moved to care for veterans without service-connected conditions. Then, as the Depression deepened, it was the government itself that formed the opposition as officials sought to curtail government expenditures as revenue fell. The inequities inherent in special treatment of veterans in hard times was becoming politically visible.

The way out the dilemma was to define the elderly in need of pensions as another deserving special class, as veterans and children already were. The Social Security system did just that by creating a privileged group for which benefits could be added. There was initially no medical care benefit for elderly, that effort having failed, but later it came with President Lyndon Johnson’s Great Society. Soldiers and sailors had earned their special treatment, as most Americans thought. There was not enough that could be done for them. And so it became, too, for the elderly after 40 quarters of work or a disability.

There are two issues with the study. First, it needs more background on what came before and what followed the period that Adler examines. Glenn Altschuler and Stuart Blumin argue in their study of the GI Bill that the rather mingy treatment of the First World War veterans was a reaction to what many came to believe was an overly generous treatment of the veterans of the Civil War. The GI Bill, which transformed American society after the Second World War, was in their view the consequence of that restrained social policy, a dedicated hospital system for veterans or no dedicated hospital system.[1] Adler could have added more about the 1932 Veterans Bonus March in Washington D.C. which was violently disrupted, souring the political scene as the Great Depression took its toll on America and giving politicians a decade later fear of what might follow after the Second World War. Instead, the book wanders rather misleadingly in the politics of national health insurance.

Second, the author uses too often the device of inserting vignettes on the experience of real veterans, gleaned from the records of soldier homes or particular hospitals, to illustrate the difficulties veterans encountered in gaining care or returning to a productive life. This may make the history more approachable to some readers, but I for one found the stories disruptive, diverting attention from a fuller explanation of the concept at hand. Overall though, Adler has produced a worthwhile work, one that helps us understand how America built its own National Health Service but for only one class of patients.

Harvey M. Sapolsky is Professor of Public Policy and Organization, Emeritus, at the Massachusetts Institute of Technology and the former director of the MIT Security Studies Program.