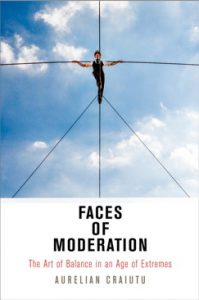 The authors whom Craiutu examines cross national cultures, expressed political views from liberal to conservative, represented different disciplines–political theory, philosophy, sociology, literature, and history of ideas–and intervened in politics to differing degrees. All but Michnik were born early in the twentieth century and lived through two world wars and the twin scourges of communism and fascism. All avoided pandering to nationalists, spoke and wrote in favor of tolerance, and did their best to maintain a dialogue with their opponents. Most developed a philosophical underpinning for their moderation. It was based on their recognition of the uncertainty of truth, or the existence of multiple truths, and the need for compromise to sustain democratic practices and culture. These six figures are admirable role models for our age, where extreme polarization and demonization of political adversaries once again threaten to make democracy unworkable.

In a theoretical chapter, Craiutu, following Albert Camus, describes moderation as an unconventional form of dissent “that can only live by rebellion” (23). He does a reasonable job of arguing for the importance of moderation in democracy and defending moderation against critics who dismiss it as a form of equivocation. He argues–unconvincingly, I think–that like the spirit of liberty, moderation defies definition. In the previous chapter, he has come close to a definition when describing the characteristics shared by his five thinkers: the belief that politics is about compromise; commitment to low key, thoughtful rhetoric that never demonizes opponents; support for the expression of diverse points of view; and search for dialogue across political divides.

The chapters addressing individual thinkers are thoughtful and informative. They provide a succinct overview of their careers and commitments to moderation. They also affirm their courage, which is another reason for valuing them as role models. Each of the thinkers was drawn to moderation in response to the extremism of the political worlds in which they lived, or observed mostly from a distance in the case of Oakeshott. They developed different intellectual foundations in defense of moderation, but their arguments share certain fundamental attributes and can be pulled together to form a coherent philosophy in its own right.

The most important assumption may be the belief, articulated explicitly and forcefully by Michael Oakeshott, that politics should never aim high. Its core concern should be “attending to society’s arrangements” (153). The Greeks viewed political life as the most central and admired activity of society, a belief propagated in modern times by German idealists and communists. Oakeshott and other moderates reject the idea that politics is a superior kind of activity. It should take a back seat to literature, philosophy, the arts, and sciences, and other activities that create values for their societies. Another important assumption is that there are no definitive solutions to intractable political, economic, and social issues and controversies. All these thinkers recognize that trade-offs have to be made. Such accommodations are never permanent and unlikely to be logically or ideologically defensible. Perfection must give way to bricolage in the interest of all members of society.

The conclusion summarizes what Craiutu calls the “metanarratives” of the book. First is the recognition that moderation is a political temperament that values self-restraint and tries to teach it to others. Self-restraint can be a personality trait or a reasoned response to a situation. It most often reflects learning. Second is the author’s belief that moderation is more than the absence of zealotry. It is a positive attribute, with philosophical foundations that represent a willful form of dissent from the political orthodoxies of the twentieth century. Third, political communities depend upon balance to survive, and this can best be obtained through dialogue among actors that encourages commitment to the rules of the game. Fourth is the eclectic nature of moderation. It is not a feature of conservatives, but has also been displayed by liberals and socialists—as has zealotry. Fifth, balance depends on moderates in all these traditions restraining their more extremist political allies. Sixth is Craiutu’s contention that moderation is neither a panacea nor a substitute for good political judgment and leadership. Politics, by its very nature, generates and thrives on deep disagreements. Moderates can nevertheless reduce, and possibly tame intransigence and dogmatism through their commitment to dialogue and compromise.

This is a timely book given the rise of zealotry, the decline of civility in politics, and the assault on freedom of speech and tolerance for dissent in many Western societies. It should be read by all university students.

Richard Ned Lebow is Professor of International Political Theory in the War Studies Department of King’s College London, Bye-Fellow of Pembroke College, University of Cambridge and the James O. Freedman Presidential Professor Emeritus of Government at Dartmouth College. His most recent books are Avoiding War, Making Peace (Palgrave, 2017), (editor) Max Weber and International Relations, (Cambridge, 2017), and The Rise and Fall of Political Orders (Cambridge, 2018). He is a Fellow of the British Academy.