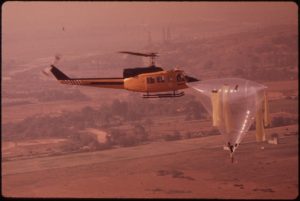 At the most basic level, it appears that none of the high-level officials responsible for environmental matters agrees with the idea that human activity is contributing to climate change. President Trump himself tweeted in 2012 that climate change was a Chinese hoax, and before he announced his candidacy he made many sarcastic remarks about global warming when the weather got cold.[2] More important, he has avoided multiple attempts to pin him down since the election on what he believes about climate change. Scott Pruitt, his choice for Administrator of the EPA, made his reputation as the Attorney General for Oklahoma by repeatedly fighting the Obama Administration, most famously on climate change matters. Ryan Zinke, the Secretary of the Interior, told Congress at his confirmation hearing that humans influence the climate but were not the main drivers of climate change, a position reflected by his fellow nominees, such as Secretary of State, and former ExxonMobil Chief Executive Officer, Rex Tillerson.[3] In their view, larger natural forces are at work that humans cannot possibly override.

With this skepticism in high places, it is no surprise that one of the few issues that Trump has attacked vigorously is federal efforts to reduce greenhouse gas emissions. During the campaign, Trump promised both to reduce the EPA to “tidbits” in the effort to ease the regulatory burden on businesses and also to ensure that Americans had clean water and clean air.[4] Since Pruitt has taken over the EPA, he has launched efforts to roll back Obama’s Clean Power Plan (CPP), as well as Obama’s expansion of clean water rules, emphasizing that EPA should be focusing on “common sense” policies that make it easier for farmers and other producers to predict their regulatory burdens. On the webpage announcing the executive order rolling back the CPP, the EPA makes a bold statement: “Implementation of the order will protect thousands of jobs and strengthen energy security, while also ensuring that our policies provide clean air and clean water for all of our citizens.” It also emphasizes that under Pruitt the EPA has started a “back-to-basics” program of protecting the environment, having “sensible regulations that allow Economic growth,” and engaging with state and local governments.[5] By contrast, Gina McCarthy, the previous administrator, had the following as her statement of principles: “Cleaning up our communities and taking action on climate change are among our priorities.”[6]

Since the inauguration, Trump has withdrawn the U.S. from the Paris accords on climate change, which went into effect just before the 2016 election. In August 2017 he directly called the Paris deal “job killing” in a West Virginia speech loaded with support for the coal industry.[7] Pruitt has fired most members of EPA’s science advisory panel, is considering a controversial “red team-blue team” debate on the scientific understanding of climate change, and has taken down the EPA’s former website with data on climate and greenhouse gases, a move that sparked several cities and states to archive the data to ensure that it is preserved for the future.[8] The Administration’s position is such that some scientists fear that it will suppress the Congressionally-mandated National Climate Assessment, drafted by scientists and analysts from 13 federal agencies. The assessment concludes that Americans are already feeling the effects of climate change and that over half of the warming that has occurred over the last 60 years can be linked to human activity.[9] It is reasonable to speculate that the next step will be to rescind the 2009 finding by Administrator Lisa Jackson that greenhouse gases endanger public health, which allowed EPA to begin regulating them.

In a way, none of these developments is very surprising, given that Republicans have almost uniformly been pro-business and often skeptical about environmental science, whether climate change or Darwinian theory. In a 2007 primary debate, at least three Republican candidates explicitly said they did not believe in evolution, and denial that humans are causing climate change sometimes seems like a litmus test for the Party’s primary voters.[10] In fact, the EPA experienced a similar narrative arc in 1981, when President Ronald Reagan, who was convinced that the EPA was too powerful and needed an outsider to rein it in, took office. Anne Gorsuch, the mother of Trump’s Supreme Court appointee, Neil Gorsuch, served as the administrator for nearly two years, and like Pruitt she oversaw a significant budget reduction and efforts to pass regulatory authority back to the states. Reagan the Western conservative, like Trump the businessman, had long opposed environmental regulations by the federal government and acted almost instinctively.

Ultimately, Reagan’s anti-environmental position weakened dramatically, and perhaps the big question is whether Trump’s will as well. After Gorsuch was compelled to resign under a cloud, Reagan brought back the original administrator of the EPA, William Ruckelshaus. His appointment effectively was an admission that Reagan’s original course had been a mistake, and the EPA regained resources and respect. Future Republican presidents, George H. W. Bush and George W. Bush, appointed respected leaders to administer the EPA, such as William Reilly, former head of the World Wildlife Fund, and Christine Todd Whitman, former governor of New Jersey. While they never carried the clout of administrators appointed by Democratic presidents, and were not always as acceptable to environmentalists, they were reasonably effective and kept the EPA’s mission relatively stable.

Reagan also shifted dramatically in his approach to the environment with his support for efforts to regulate ozone-depleting chlorofluorocarbons (CFCs) through the Montreal Protocol in 1987. Diplomat Richard Benedick demonstrated that Reagan’s administration took the lead in the international efforts to phase out the manufacture and use of CFCs because of a combination of Reagan’s personal experience and the strong position of U.S. industry. Most important, the effort to restore the ozone layer was still based on a theory about the role of chemicals in its depletion, rather than any hard evidence.[11] Perhaps if Mar-a-Lago gets wiped out by a hurricane, Trump will have a similar epiphany about climate change.

Trump, like Reagan and Nixon before him, may also be forced to conclude that environmentalism is good politics even if it runs counter to popular promises to cut taxes and reduce government. Having won a minority of the popular vote and facing declining approval ratings, he does not appear to be a safe bet for re-election with his current policy priorities. A recent Pew survey suggests that more than half of Americans consider climate change a serious threat, although it also makes clear that it is of far more concern to those on the center and left than those on the right.[12] During the campaign, while making clear that he opposed most regulation, Trump still promised that the United States would have the cleanest water and cleanest air. So far, Pruitt has advocated robust brownfields and Superfund programs, although the administration’s budget proposals make it seem unlikely that such programs will be more effective than before. More to the point, Republicans in Congress made clear in a hearing that they were opposed to the proposed drastic cuts when they targeted programs from their districts. The states also have stepped into fill the breach, with California in particular ratcheting up its cap-and-trade system for greenhouse gases.[13]

In the long run, it may be that Trump and Pruitt’s efforts to delegitimize the overwhelming scientific consensus on climate change will not matter as much as some fear. The United States surrendered its hard-won leadership on matters of environmental diplomacy back in the early 1990s when the first Bush Administration got steamrolled by an international consensus to take some action on climate change. Even when the Democratic Party controlled both houses of Congress and the White House, the U.S. government took no steps to get in line with 1997’s Kyoto Protocol on climate change. And yet a combination of improving technology and increased consumer focus has, since 2008, led to a gradual decline in carbon dioxide emissions from electricity production in the United States, and Europe has posted even more consistent declines since the early 1990s. The International Energy Agency reports that global CO2 emissions remained flat for the third consecutive year in 2016, even as the global economy grew by more than 3%.[14] As economist Geoffrey Heal argues, even as the United States has been gridlocked about a political response, the global technology sector has taken large strides to reduce carbon emissions: “the technology for replacing [fossil fuels] is ready.”[15]

A fellow birder recently said to me something to the effect that we had better enjoy the environment while we still have it, and he did not need to add that he was thinking of Trump’s policies. On one hand I share his deep concern, and yet the fact that this generally non-political friend is paying attention to politics and pushing back, even in small ways, suggests to me that environmentalism is so deeply engrained in U.S. society that the pushback will once again be powerful enough to blunt a major assault on environmental legislation. Administrator Pruitt might want to take a close look at the museum before he renovates it too much.

Kurk Dorsey teaches U.S. diplomatic and environmental history at the University of New Hampshire. He is the author of Whales and Nations: Environmental Diplomacy on the High Seas (University of Washington Press, 2013).

Clean Power Plan Environmental Protection Agency EPA Trump
We use cookies to improve your experience. By your continued use of this site you accept such use.
Accept Read More
Privacy & Cookies Policy
Necessary Always Enabled