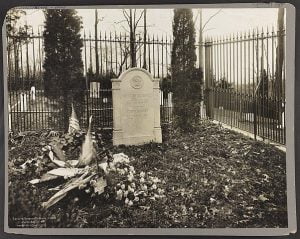 An Unquiet Grave on Long Island

Usual suspects come to mind from among the Founders, as commentators have harked back to Alexander Hamilton and James Madison and their warnings against demagogues. Among presidents, Thomas Jefferson, Abraham Lincoln, Woodrow Wilson, Franklin Roosevelt, and Lyndon Johnson all stand out as vivid contrasts and often diametric opposites to today’s president. Among non-presidents such champions of the common people of both races and genders as Jane Addams, Eugene Debs, Frederick Douglass, Martin Luther King, Jr., and Robert La Follette spring to mind as further examples of how different and how much better our leaders used to be.

Let me add to the field by suggesting a seemingly less obvious candidate for rapid grave-spinning—Theodore Roosevelt. TR—who hated the nickname “Teddy”—may strike some as a less obvious entry because he seems to have had things in common with ‘The Donald.’ He, too, had a vivid, overweening personality, and he dominated public attention with an ease that exasperated his opponents. He reveled in wielding power, especially on the international stage, and at home he often ignored attempts to limit his actions. His friend Henry Adams once called him “pure act,” while Speaker of the House Joseph G. (“Uncle Joe”) Cannon, a fellow Republican, sniffed that Roosevelt had “no more use for the Constitution than a tom cat has for a marriage license.”[1]

Those characterizations could easily apply to Trump, but not really to TR. Comparing these two men along these lines is superficial and totally misleading. For all his bluster and dynamism, Roosevelt was almost never impulsive or thoughtless in word or deed. Even his most high-handed actions on the international stage, particularly his collusion in the revolution that led to the building of the Panama Canal and his sending the Great White Fleet around the world, were carefully calculated moves and done with an eye to how they would affect the United States’ relations with other countries. He never gratuitously insulted foreign powers or their leaders. In fact, his diplomatic actions were usually models of decorum and punctilio.

Likewise, Roosevelt’s most brazen assertion of presidential power in defiance of Congress occurred in pursuit of a cause that is anathema to the current president—conservation of natural resources. As a naturalist, hunter, rancher, and devotee of science, Roosevelt pursued both aesthetic and utilitarian goals when he championed stewardship of the environment. He wanted to protect the beauties and bounties of the natural world for the enjoyment and wise use of present and future generations. This led to the biggest domestic clash of his presidency. In 1907, development-minded westerners and conservatives on Capitol Hill, mainly in his own Republican party, stripped him of the authority to sequester public lands for forest reserves, and they embedded their move in a must-sign agricultural appropriation bill. Roosevelt responded by mobilizing his newly created Forest Service to map out millions of acres for new reserves and then rushing to beat the deadline under which the bill would become law. These lands came to be dubbed the ‘midnight reserves.’ If that might look like a Trumpian move to some, it is well to remember not only the cause it served but also the thought that went into it.

Some historians, myself included, have maintained that Roosevelt was at heart a conservative. He wanted to preserve the existing social and economic order, and he feared class warfare and revolutionary upheaval. But his principal means of pursuing such conservative ends lay in adopting reformist means. As president, he sought to curb the power of big business through anti-trust suits and other regulatory measures, thereby earning him the reputation of ‘trust-buster.’ After he left the White House, he grew increasingly alienated from his party’s conservative bosses and his hand-picked successor, William Howard Taft, and in 1912 he bolted the Republicans to form a new party, the Progressives, and run for president again on a platform of advanced economic regulation and social welfare policies.

In international affairs, Roosevelt harbored a deep appreciation of the delicacy and danger of the great power rivalries that later led to World War I. As president, he worked in subtle, behind-the-scenes ways to maintain peace and order. Thanks to his mediation of the Russo-Japanese War he became the first American win the Nobel Prize for Peace. That enhanced his already stellar popularity at home, as most Americans regarded his conduct as an act of disinterested benevolence. It was far more. Roosevelt knew that this war in Asia brought the danger of driving apart Russia’s and Japan’s respective allies, France and Britain, to the profit of Germany, which he regarded as the greatest troublemaker and threat to peace and order. Soon afterward, he used the thinly veiled pretext of a commercial treaty with Morocco to participate in the Algeciras conference, with the aim of thwarting further German machinations. In 1910, when he went to Norway to accept the Nobel Prize, he became the first major public figure of any country to call for an international peace-keeping organization—a league of nations empowered to stifle aggression and forestall major wars.

If all this makes Roosevelt look like the opposite of Trump, it should. But the chasm that divides them delves deeper still. Unlike the man who boasts of never reading a book or even highly distilled policy papers and intelligence summaries, Roosevelt was probably the most widely read of any president. He was also the most prolific published writer of any of them. He knew at least five languages and was deeply versed in history, literature, and philosophy, and he was one of the few presidents who have been truly literate in the sciences. Other presidents have also been widely read and intellectually curious, but Roosevelt took a big step further. He was a true intellectual—one of only three since the Civil War (the other two being Woodrow Wilson and Barack Obama). He cared about ideas, and he guided his actions by reflecting on them.

When Roosevelt and Wilson ran against each other for president in 1912, they conducted the finest de facto debate ever witnessed in one of these contests. This one pitted not only two able, eloquent men against each other, but it also exposed their divergent philosophies. For all his apparent “radicalism” (his own self-description), Roosevelt preached a gospel of conservatism. He exhorted citizens to overcome their differences, especially material ones (which he derided as “the creed of the ‘Havenots’ arraigned against the creed of the ‘Haves’”), and pursue such higher goals as national strength, unity, and dignity through devotion to his “New Nationalism.”[2] Wilson, by contrast, advocated release of people from restraints imposed by unjust economic power so that they could achieve their full potential and thereby assure continuous national renewal through his “New Freedom.” It is a measure of how much has changed in the last century that this pair fought over which of them was the truer friend and champion of big government, which they both regarded as essential to pursue their goals.

But what makes Roosevelt possibly the one who probably spins fastest in his grave today was his attitude toward money and its overweening influence in public life. No major figure in our political history, not even his contemporaries Debs and La Follette, had harsher things to say about the rich and their power. He railed against “malefactors of great wealth.” J.P. Morgan once suggested that they settle an anti-trust dispute by having the president “send your man to my man and they can fix it up,” and TR affected to be amused at the suggestion.[3] Privately, however, he seethed at anyone presuming to be the equal of the president, at any private interest presuming to be equal to that of the people, as represented by their government.

TR’s hostility to tycoons and big businesses having too much power sprang from deep within him. He was a patrician, a member of the closest thing America has had to an aristocracy. He grew up aghast at the pretension and ostentation of new-moneyed industrial and financial barons and the society antics of those he derided as “Newport cads.” (This attitude is not completely dead today, as evidenced by former first lady Barbara Bush’s posthumously aired contempt for Trump as the epitome of greed.) Roosevelt decried the worship of money, calling “an individual in the bourgeois state of development . . . not unapt to be a miracle of timid and short-sighted selfishness. The commercial classes are only too likely to regard everything merely from the standpoint of ‘Does it pay?’”[4] He grudgingly conceded that what he often dismissed as “mere wealth” could be useful in fostering philanthropy to promote art and learning, and valued industrial power in undergirding military might on the international stage. But for him, those were only means to greater ends, which were always science, literature, music, art, and military and political service.

‘Materialism’ was what TR called the worship of money, and he hated it with all his heart and mind. How would he regard our current politics, not just the president?  He would be appalled. He would ask what had become of all that he strove to do, what had happened to the way he used his ‘bully pulpit’ to inspire fellow Americans to walk in paths of national service and greatness. The one-hundredth anniversary of his death has just passed, and anyone who wants to feel the seismic force of an unquiet soul alarmed at the state of our nation should visit his gravesite in Oyster Bay.

[2] That phrase and an exposition of TR’s pursuit of higher goals came, among other times, in his speech in Milwaukee on 14 October 1912, just after he had been shot in an assassination attempt. See Hermann Hagedorn, ed., The Works of Theodore Roosevelt (New York: Scribner, 1926), vol. 17, 322.