Nuclear weapons are fundamentally different from other military tools.  The technology is familiar and yet still exotic; the ability to split nuclei and fuse them together remains one of the most extraordinary technical milestones of the last century.  And the yields of nuclear explosions are orders of magnitude greater than those of conventional weapons, making the effects of a hypothetical nuclear war hard to comprehend.  In a clash between nuclear-armed states, the devastation might overwhelm the value of any imaginable political goals.  Such a conflict may not be unthinkable, but it is hard to think about.

We find it somewhat unusual to have a book review essay reviewed by another scholar. But we are pleased that H-Diplo chose to accord our piece “Is Grand Strategy a Research Program? A Review Essay,” this honor. We are also pleased that Dr. Nina Silove chose to devote the time and effort to this task.

Thierry Balzacq, Peter Dombrowski, and Simon Reich (BDR) enquire whether grand strategy is a field of study or a mature research program. This is an important question, answers to which would be of tremendous interest to scholars of grand strategy and pivotal for the future of this ever-expanding field of study.

It has become accepted wisdom in Washington, D.C., and among many international relations scholars, that East Asia is a region rife with geopolitical rivalry, and that the United States and China are destined for protracted great-power competition and perhaps conflict. In his newest book, David Kang offers a sharply contrarian viewpoint. He argues that East Asia is far more peaceful and stable than it seems, that China’s rise is not particularly threatening to most East Asian states, and that the United States will only find itself in an intense competition with China if it makes unwise policy choices that turn that danger into a self-fulfilling prophecy. The United States should, therefore, refrain from the temptation to double-down on its East Asian security commitments and efforts to check China’s rise; it should adopt a more restrained posture that minimizes rather than embraces great-power competition.

Nina Silove argues that “the popularity of the term ‘grand strategy’ has increased exponentially since the end of the Cold War” (1). This bold and questionable claim will warrant closer examination later. But its underlying point is nonetheless true. A key-word search for “grand strategy” in articles in refereed journals for the year 2015 produced 21,444 hits.[1] If scholarship is what scholars do, then grand strategy is an important area of study by any standard. In her article, Silove asks what scholars mean when they use the term. Many scholars, she finds, use their own definitions. Some use one or more definitions proposed by others. Some scholars even invoke “grand strategy” to question the importance, coherence, and even the existence of grand strategy.[2] In her view, dissensus reigns in the existing literature. Her purpose in “Beyond the Buzzword: The Three Meanings of “Grand Strategy” is to develop a taxonomy of “grand strategy” as scholars use the term. 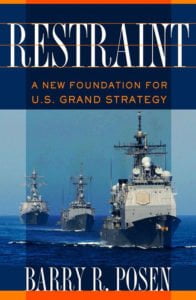 There are many international relations theorists in academia who opine on world order and grand strategy.  There are many policy analysts in think tanks with deep understanding of military programs, budgets, and operations.  There are not many, however, who combine both sorts of expertise in equal depth.  Barry Posen is one of the very best of the very few who do.  Since the Cold War he has focused on clarifying the logic of choice among several models of American grand strategy in the context of practical considerations of cost.

In their recent article “Don’t Come Home America: The Case against Retrenchment,” Stephen G. Brooks, G. John Ikenberry and William C. Wohlforth (hereafter referred to as BIW) argue that the prevailing scholarly wisdom on U.S. grand strategy is wrong.[1] This wisdom states that the U.S. should curtail or eliminate its overseas military presence and security commitments and minimize or eschew its efforts to lead the liberal institutional order.[2] The costs of the United States’ strategy of ‘deep engagement’ with the world have been exaggerated, according to BIW, and its benefits neglected. Their article is an important contribution because it is the first to make a strong case for deep engagement that is grounded in International Relations theory. In claiming that deep engagement is the cure-all, however, BIW go too far. It is one thing to claim that the costs of retrenchment would be too high, and another to claim that deep engagement and only deep engagement could have caused the outcomes attributed to it. The second claim may not be correct and does not follow from the first.