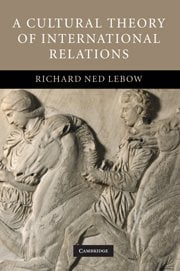 Theories of international relations in the grand sense are rare. Hans Morgenthau “purport[ed] to present a theory of international politics” in 1948.[1] Raymond Aron’s Peace and War: A Theory of International Relations appeared in 1962. Kenneth Waltz presented his unmodified Theory of International Politics in 1979. It would be twenty years before Alexander Wendt countered with another article-less book title: Social Theory of International Politics. [2] A decade later, Richard Ned Lebow presents A Cultural Theory of International Relations, returning an indefinite article to his title along with a page-count rivaling only Aron’s tome. The modesty of the title, however, belies the book’s ambition. The reviewers praise the historic breadth of the book and welcome its focus on honor and social standing as explanatory factors. They differ on the value of grand theory. Richard W. Mansbach embraces Lebow’s project, both in its theoretical ambitions and its empirical insights. Patrick Finney is sympathetic to its culturalist core but more skeptical about the novelty and explanatory power of some of its claims. Geoffrey Roberts commends it as a grand historical narrative, but has doubts about the enterprise of grand theorizing in general.  In the end, the merit of grand theory itself more than the specifics of Lebow’s offering divides Mansbach’s more favorable review from the more critical appraisals of Finney and Roberts.

Brian Rathbun asks an arresting question, and a fair one.  Several years ago Jeffrey Legro and Andrew Moravcsik hurled down the gauntlet by asking “Is Anybody Still a Realist?”  Their answer was:  not really.[1]  If Legro and Moravcsik are correct that nearly every IR scholar today considers domestic factors causal in some fashion, then we must ask whether that makes everyone a liberal.  And if the answer turns out affirmative, is that not a problem for liberalism?  If we are all liberals now, then does liberalism have any meaning in IR research?