It is hard to recapture the confidence, indeed the hubris, which emerged in certain policy circles in 2002 and early 2003, after the United States successfully brought down the Taliban government in Afghanistan and was primed to overrun Iraq. It was not simply neoconservative officials from the George W. Bush administration possessed by delusional visions. As a young (ish) assistant professor in Austin, Texas in the winter of 2003, I vividly recall two prominent DC visitors—both hawkish Democrats—predicting that the inevitable toppling of Saddam Hussein’s regime in Bagdad would be the first steps in a great American project to reconfigure the states of the greater Middle East. This would be accomplished not simply or even primarily by overwhelming military power, but instead by powerful historical forces that made the new universalistic, liberal political and economic order nearly inevitable. Global tyranny and authoritarianism would be put on the run. What seemed unhinged then—the idea that the United States could rebuild states in its own image—seems, fourteen years later, like the beginnings of a deeper tragedy whose effects we feel sharply today. 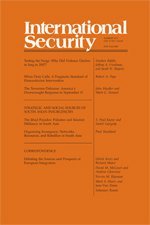