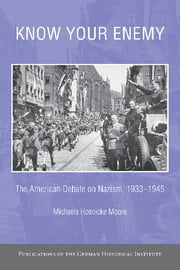 Professor Michaela Hoenicke Moore’s Know Your Enemy:  The American Debate on Nazism, 1933-1945 received the Myrna F. Bernath Book Award in 2010 from the Society of Historians of American Foreign Relations (SHAFR) for the best book written by woman in the field of U.S. foreign relations history and honorable mention for the Stuart L. Bernath Book Prize which is awarded annually to an author for her or his first book on any aspect of the history of American foreign relations.  The roundtable reviewers certainly agree with this favorable recognition.  J. Simon Rofe praises Hoenicke Moore’s study as a “tour de force”; Justus Doenicke begins his review by declaring that Know Your Enemy “is an academic tour de force, equal in research to several doctoral dissertations;” Heather Dichter concludes that Hoenicke Moore has produced an “excellent book” that “will appeal to scholars interested in a variety of topics;” and David Schmitz describes the book as a “path breaking work” and a “model of combining cultural analysis with more traditional approaches to the study of foreign policy.”