Nuclear weapons are fundamentally different from other military tools.  The technology is familiar and yet still exotic; the ability to split nuclei and fuse them together remains one of the most extraordinary technical milestones of the last century.  And the yields of nuclear explosions are orders of magnitude greater than those of conventional weapons, making the effects of a hypothetical nuclear war hard to comprehend.  In a clash between nuclear-armed states, the devastation might overwhelm the value of any imaginable political goals.  Such a conflict may not be unthinkable, but it is hard to think about.

With the advent of nuclear weapons came the question of how their very existence changed the way we conduct and think about warfare.  Nearly seventy five years after their first (and, to date, only) use at the end of World War II, the question remains far from resolved, as nuclear ‘optimists’ and ‘pessimists’ continue to debate what Andrew H. Kydd presents as a seemingly simple question: “Is the world better off with nuclear weapons or without?” (645).  Kydd’s goal in this article is not to definitively adjudicate the question and come down conclusively on either side, but rather to add the conceptual element of ‘expected costs’ to the debate.  In doing so, he introduces a useful meeting point for the two camps.

Todd Sechser and Matthew Fuhrmann’s book Nuclear Weapons and Coercive Diplomacy provides a sustained case against the use of nuclear weapons as a tool for compelling actors to do something they would not otherwise want to do. In their reviews, three eminent scholars, Kyle Beardsley, Dan Reiter and Nina Tannenwald, are united in their praise, calling the book “important,” “powerfully argued,” and “compelling.” They diverge significantly in their critiques, however.

Nuclear strategy can be a difficult subject to study. In the end, our main preoccupation is understanding why there has not been a thermonuclear war, and what we can do to continue this streak. It is close to impossible to craft definite statements about an event that never happened. We have a strong hunch that nuclear deterrence prevents other states from using their weapons. Deterrence, however, is based on characteristics—fear, resolve, assurance—that are psychological in nature, and hard to observe or measure except after deterrence has failed. Nuclear proliferation and nonproliferation can be equally confounding. Given the benefits that nuclear possession supposedly conveys upon states—more or less securing their independence and protecting them from invasion—the fact that the number of states possessing the bomb is in the single digits, far fewer than anyone would have predicted a half century ago, is surprising.

Hacking the Bomb begins its narrative with WarGames—a 1980s sci-fi movie about a teenager who inadvertently almost starts nuclear war by hacking into a nuclear control program within a U.S. computer. This is a common vignette within the cyber literature (see, for example, the introductions of Fred Kaplan’s Dark Territory[2] as well as “Thermonuclear War”[3]) and it represents what most scholars believe is the most dangerous potential implication of cyber operations—the cyber threat to nuclear command, control, and communications (NC3). As Erik Gartzke and Jon Lindsay conclude, “offensive cyber operations against NC3 raise the risk of nuclear war . . . today the proliferation and modernization of nuclear weapons may raise the risk slightly. Subversion of NC3 raises the danger of nuclear war slightly more. Cyberwar is not war per se, but in rare circumstances it may make escalation to thermonuclear war more likely.”[4]

In “Nuclear Beliefs: A Leader-Focused Theory of Counter-Proliferation,” Rachel Whitlark advances a new framework to explain why military force is rarely employed to prevent the spread of nuclear weapons. According to power transition theory, a nuclear weapons program should spark an intense security dilemma with a high risk of war as other nations consider using force to forestall an adverse shift in the balance of power.[1] Contrary to this conventional wisdom, Whitlark demonstrates that even a looming proliferation threat does not pressure all leaders to “think and act similarly” by mulling over preventive war (550). Instead, the article shows that presidents and prime ministers come into political office with prior beliefs about the consequences of proliferation and stability of nuclear deterrence. For some leaders, a sanguine judgement about the ability to manage nuclear-armed adversaries becomes an anchor against even deliberating coercive counter-proliferation strategies. Whitlark marshals archival evidence to show how President John F. Kennedy’s entrenched pessimism about proliferation led him to consider a range of military options against China’s emerging nuclear program. In stark contrast, President Lyndon B. Johnson’s optimism seemed to result in these same options being taken off the table on the eve of the first Chinese nuclear weapons test. 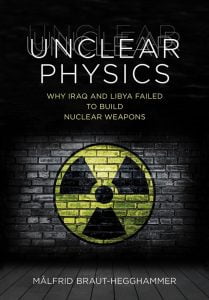 Malfrid Braut-Hegghammer’s new book Unclear Physics: Why Iraq and Libya Failed to Get the Bomb should find itself on the shelf of any serious student of nuclear proliferation, international security, and the internal and external security dynamics of dictatorial regimes. It is by far the best history of Iraq’s and Libya’s failed attempts at acquiring nuclear weapons, leveraging diverse archival material and primary interviews to illuminate new and interesting features of both programs. It argues that due to a lack of state capacity, Iraqi and Libyan dictators Saddam Hussein and Muammar Gaddafi stunted their own nuclear programs, but to varying degrees. The Libyan program was terminally ill from the beginning, but Saddam and his son-in-law, Hussein Kamil, according to Braut-Hegghammer, were on the cusp of a major breakthrough in their nuclear program on the eve of the 1990 invasion of Kuwait. She argues that while both programs suffered from deep pathologies, Kamil’s management of the program pushed Iraq farther along by 1990 than anyone had realized. The implication is that, had Saddam not invaded Kuwait, Iraq might have successfully acquired nuclear weapons. The historical value of the book alone is worth the price of admission. It has no peer in its discussion of these nuclear programs. And the implicit theoretical argument raises a host of fascinating questions about the ability of some types of regimes to effectively pursue nuclear weapons, advancing work done by Jacques Hymans and, more recently, myself.[1] 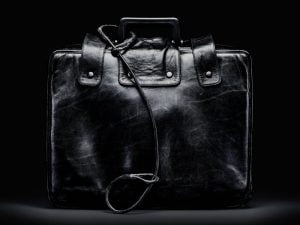 This football comes only in black…

President Donald Trump has now assumed control over the nation’s arsenal of more than 4,000 nuclear weapons. What will he do with them? We do not yet know the Trump administration’s approach to nuclear strategy, but Trump has offered some clues to his mindset. He has denounced nuclear arms control, declaring that he would welcome a renewed nuclear arms race with Russia.[1] He has indicated that he might be willing to allow Japan and other U.S. allies to acquire nuclear weapons.[2] And he has suggested that he might be willing to use nuclear weapons against the Islamic State.[3]