Nobel Laureate Thomas Schelling described the tens of thousands dead in the Korean War as “undoubtedly worth it” because the United States needed to defend its reputation for resolve.[1] In 2013, President Barack Obama implicitly disagreed with Schelling, when he refused to carry out military operations based on his ‘red line,’ after Syrian President Bashar al-Assad used chemical weapons. Of all the hot-button debates about the use of military force, few arouse such recurring, intractable debates as whether, and when, it is worth fighting for reputation. 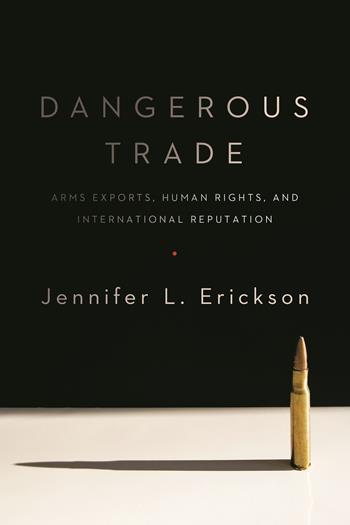 Jennifer L. Erickson’s Dangerous Trade is a powerful reminder of the manifold ways in which arms control raises the most enduring questions in the study of international politics. The ability to regulate violence capacity on a given territory is central to the very idea of the modern state. The unfettered capacity to wield organized violence externally in pursuit of collective interest is the central preoccupation of governments. In the middle of the last century, thinkers such as Bernard Brodie, Henry Kissinger, Thomas Schelling, and Hedley Bull were preoccupied with the special incentives nuclear weapons might generate to overcome barriers to cooperation in anarchy and accept limits on states’ violence capacity in their own (and the world’s) best interest.[1] As scholars such as Robert Jervis and Charles Glaser later made clear, however, explicit or implicit inter-state cooperation on conventional arms control could play a critical role in moderating the security dilemma.[2] Those works and the studies they inspired bore deep into the core questions of security-seeking and cooperation under anarchy, but often abstracted away from important related question of domestic politics, the origins of state interests, and the role of norms and ideas in inter-state relations. Subsequent lines of research began formally to incorporate domestic political incentives, and, inspired by the landmark collection edited by Peter J. Katzenstein, The Culture of National Security[3], collectively held ideas and norms.