Contested freedom of navigation, welcome back.  Absent from mainstream debates about the relevance of military power in international politics since the end of the Cold War, until recently naval power had come to embody the linear progression underwriting Francis Fukuyama’s ‘end of history.’[1] Since the United States had no major enemy left to fight as the Soviet navy faded into the twilight of history, freedom of navigation stood without threats.  The ocean had become the staging platform for the uncontested projection of power of the U.S. and its allies.  Exploiting command of the sea in support of expeditionary campaigns from the Balkans to the Middle East replaced Cold War concerns over securing sea control in the North Atlantic or the Eastern Mediterranean Sea.  Reflecting upon this doctrinal transformation in the mid-1990s, Geoffrey Till remarked that the emergence of requirements for ‘“good order at sea” to manage resource depletion and environmental challenges further added a new dimension to an overall ‘post-modern’ shift in naval affairs.[2] 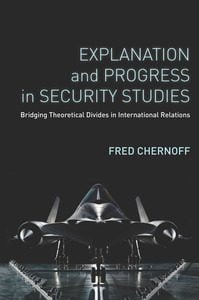 Defining scientific progress in terms of the cumulation of knowledge, predictive power, and an “approach-to-consensus” regarding the best explanation when intellectual disputes arise, Fred Chernoff raises the critically important questions of why is there relatively little progress in the field of security studies as compared to the natural sciences, and why is there more progress in some areas of security studies than in others. He argues that one important answer to these questions is that scholars in security studies, unlike those in the natural sciences, use different philosophy of science criteria of evaluation and are rarely explicit about what those criteria are. Chernoff finds support for his argument in an empirical examination of how security studies scholars make judgments about the quality of competing explanations regarding three important research questions in the field—nuclear proliferation, balance of power and alliance formation, and the democratic peace. With respect to the latter, he argues that scholars have explicitly stated their criteria, reached agreement about the appropriate criteria, and moved towards consensus on the validity of a liberal explanation (though which particular liberal explanation is still contested). Chernoff includes a discussion of alternative explanations for the lack of scientific progress in security studies, including the fact that some scholars are answering different questions rather than providing different answers to the same question. He concludes with some useful reflections on the role of metatheory in international relations research programs.

American political scientists who perform case studies straddle two very different strategies of inquiry. On the one hand, they seek to understand politics in terms of narratives that explore closely the events in a single historical episode. On the other, they work within a disciplinary framework that emphasizes the statement of general theories, the treatment of events as samples drawn from a larger population, and hypothesis testing using statistical inference as a central activity. That these two perspectives are deeply in tension has been recognized since quantitative social science began in the early twentieth century, and has been the source of seemingly never-ending disciplinary controversy.[1]