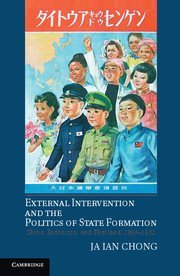 The modern state is the most fundamental unit of international politics but the literature on comparative state formation has relatively recent origins.[1] This literature builds on Western European cases and has slowly expanded its comparative scope to cover Asia, Africa, and the Americas. Scholars have debated the role of various factors such as war, religion, geography, and elite politics that shape or drive the state forming processes. Yet few have attempted to theorize about how foreign intervention may affect those processes.[2] Ja Ian Chong’s book will thus be particularly helpful for those who study state formation in the global periphery. The book is also useful for diplomatic historians interested in understanding the range of impacts foreign intervention can theoretically have on the emergence of new states during colonization, decolonization, and the Cold War.