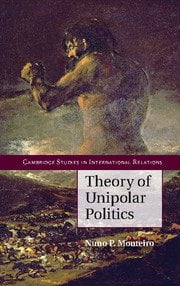 How long will the United States remain the world’s sole superpower, uniquely capable of commanding the commons and projecting sustained military power to overseas regions? Why has the United States been so prone to use military force in the years since the Soviet Union collapsed? And how might answers to these questions hinge on strategic choices made in Washington?   These are the questions Nuno Monteiro set out to answer in his rigorously argued Theory of Unipolar Politics. They have been at the center of intense debates for a quarter century—and not just in the ivory tower but also among pundits, politicians, intelligence analysts, policymakers and even leaders of major powers.   Monteiro’s arguments have attracted a lot of attention, and deservedly so. Not only does he develop them with great care and express them in clear, forceful prose, he does not shrink from tackling tough problems. In contrast to Kenneth Waltz’s seminal Theory of International Politics,[1] for example, Monteiro’s book deals head on with the interaction between strategic choice and systemic outcomes and the influence of nuclear deterrence on classical balance-of-power thinking.