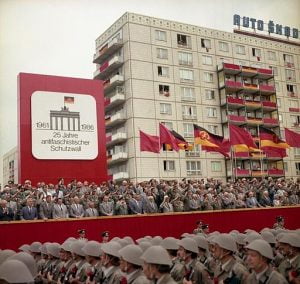 On the night of November 9, 1989, it was apparent to everyone on the scene in Berlin, and to spectators across the world, watching on TV, that history had reached a turning point. The ramifications of the opening of the Berlin Wall, as was also widely understood at the time, would not be limited to central Europe, but would reverberate around the globe. A little less than a year later, U.S. president George H.W. Bush, addressing Congress, articulated this understanding in calling for a ‘new world order.’  Separating this phrase both from its rhetoric of Cold War triumphalism and the various conspiracy theories that have grown up around it, I would suggest that the 1990s actually did see the development—tentative, hesitating, contradictory and incomplete—of a new world order, one reflecting the turbulent events of 1989 across the Eurasian land-mass, as well as the aspirations that propelled these events, the promises of 1989.  But by the end of that decade and the beginning of the new millennium, a reaction to that order was beginning to emerge, which would strengthen across the early years of the twenty-first century.  The two political upheavals of 2016, the Brexit vote, and the election of Donald Trump as American President, are major signs of the triumph of that reaction, the end of the new world order, and the failure of the promises of 1989.