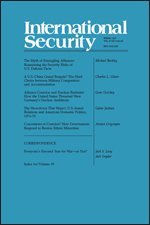 In “Alliance Coercion and Nuclear Restraint,” Gene Gerzhoy offers a novel theory of how alliances can prevent nuclear proliferation. Contrary to the conventional wisdom, which holds that alliances prevent proliferation by reassuring the client state and providing a substitute for an indigenous arsenal, Gerzhoy argues that clients in threatening security environments will nonetheless be interested in nuclear weapons since they can never have full confidence in their patrons’ present and future commitments. As a result, in order to prevent a client from going nuclear, the patron must employ threats of military abandonment, coupled with an assurance that its security commitment will be maintained (or increased) if the client complies and gives up its nuclear program. Whether these threats are successful, according to Gerzhoy, depends on the degree to which the client is militarily dependent on its patron. The article tests the theory with an in-depth examination of U.S. policy toward West Germany’s nuclear ambitions in the 1950s and 1960s. Consistent with the theory, Gerzhoy finds that West Germany was interested in nuclear weapons despite American protection, and that it only gave up these ambitions as a result of American coercion and assurances.