When the Associated Press projected Joe Biden as the winner of the 2020 presidential race on November 7, I joined in the collective sigh of relief that issued forth from millions of Americans who had come to view Donald Trump as an existential threat to democracy.  Yet, like many, I remained puzzled that Trump still enjoyed so much popular political support and that the ‘Blue Wave’ had not been stronger.  As a labor historian, I was particularly baffled by the working- and middle-class voters who had seemingly come to view Trump as a populist hero of working people and seemed convinced by his argument that the real threat to their well-being was not the corporate elite but the cultural, political, and media elites, in combination with illegal immigrants, who were allegedly taking American jobs, and Black Lives Matter activists, who were accused of fomenting violence on American streets.  To anyone schooled in the left-wing populism of the American Gilded Age, the worship of a tax-dodging Robber Baron as a savior of working people seemed ironic but also frightening.  Continued white working-class and rural support for Trump and his political allies, despite their false narratives of election fraud and recent efforts to overthrow the results of a legitimate democratic election, suggest that Trumpism within the Republican Party will survive his electoral defeat. 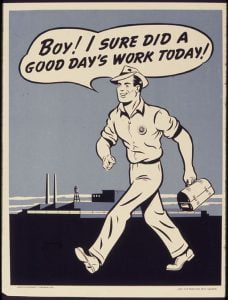 As a recent Washington Post article argued, the role of working-class voters in electing Donald Trump has likely been exaggerated. One of the problems with much election analysis, suggest the authors, is that it has used educational levels as the determinant of who belongs to which class. Yet if one uses household income levels under the median of $50,000 a year as the primary criterion, then only about thirty-five percent of those who voted for Trump were working-class. In other words, a majority of Trump supporters were relatively undereducated (lacking college degrees) but were either middle-class or affluent in terms of income.[1]